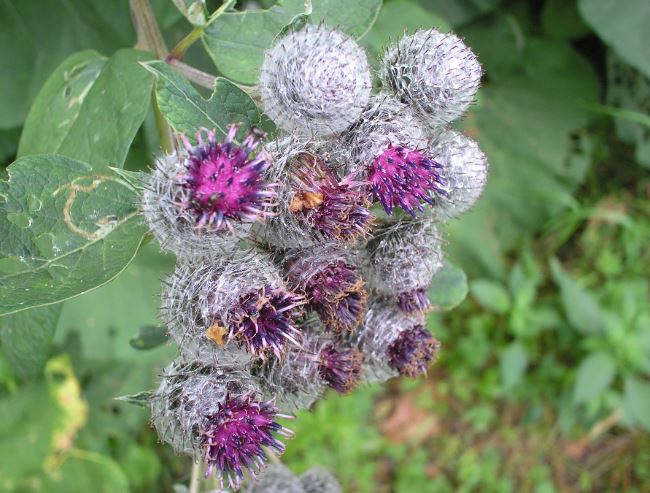 Due to the moderate antibacterial actions of burdock, it’s also considered an ideal cure for urinary tract infections as well.

Burdock root is considered to be a great remedy when it comes to curing fever. Plus, it also helps lower and treats headaches as well. Burdock root helps in lowering, as well as treat, fever as well as certain kinds of headache.

Burdock root helps neutralize as well as eliminate poison inside the body. It’s also often utilized for both fungal and even viral infections which may include the following:

In addition, it has anti-bacterial qualities which help encourage wound healing as well as assist in treating ulcers.

Burdock root contains inulin, a soluble and prebiotic fiber that helps improve digestion and helps lower blood sugar, making it a great choice for people who are trying to naturally manage their blood sugar levels.

Burdock has arctigenin (a lignan located in some plants in the Asteraceae Family) including greater burdock (Arctium Lappa). Greater burdock has been proven to ward off cancer by selectively blocking the proliferation of cancer cells and by inhibiting the production as well (NPAT proteins). Therefore crippling the cancer’s ability to multiply and reproduce.

In addition, it was also found that arctigenin was a cancer-specific phytochemical that killed human cancer cells in the lungs, liver and in the stomach.

Your spleen is always in constant contact with your blood so as burdock root cleanses your blood, it also helps cleanse and protect the spleen. It can help the spleen because it improves the quality of blood as well as liver health, circulation and fights inflammation. Improving these 4 factors has a direct postive effect on spleen health, so you definitely want to include burdrock in your spleen-healing lineup.

Burdock root is helpful in treating tonsillitis because of the following:

Burdrock root is known for its potent anti-inflammatory benefits, helping to soothe arthritis.

One reason why burdock shows promise for naturally fighting off cancer is the fact that it contains arctigenin. Articgenin is a lignan found in certain plants of the Asteraceae family, including greater burdock (arctium lappa), which has been showed to ward off cancer cells by selectively stopping the proliferation of cancer cells and by inhibiting the cancer cells’ production to certain proteins (NPAT proteins), thus crippling cancer’s ability to multiply.